I can't believe it's Halloween tonight and I haven't written a post in forever. I have been meaning too but it has been so busy aroudn here (lots of stuff to write about, but no time to do it!).

But for tonight I will focus on our Halloween this year. I was excited to take both of the boys trick or treating this year because last year they moved TOT up a day and we had no idea until the trick or treaters showed up at our door asking for candy as I was trying to put Henry to bed. We picked out their costumes in September so I could start working on them to make sure they would be finished by Halloween. They turned out great, they (well Wesley) decided to be a knight and a dragon. I tried to get Christopher to not be lame and be Justin Bieber this year but....he is lame. Sorry. Maybe next year. I will have to come up with a family costume and make him wear it. He did hand out candy to the kids though. 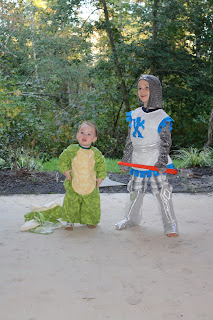 All of our decorations are packed up in our storage unit and we couldn't get to them so we had to improvise this year. We cut out paper bats (got the pattern from Country Living online) and hung them across the mirror in the dining room. We also hung up spider webs (they were supposed to glow in the dark but it is too light in here to see that). I had some table cloths from my mom and a cute Halloween banner I had picked up at Home Goods last year after Halloween (which is why it wasn't packed up with everything else!). And of course we had our pumpkins that we carved: 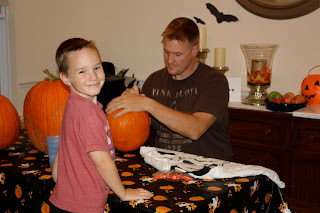 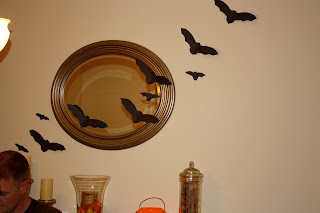 We also had two "regular" pumpkins (you know, the typical Jack-o-lantern faces) and a pumpkin with a "P" on it for our last initial.

We had our traditional spaghetti dinner (this year with Halloween shaped pasta) and then the boys got all dressed up to go out. This year Wesley got invited to go out trick or treating with one of the older boys in the neighborhood so we went around with him. Of course it started raining as soon we went out and did not stop all night. However, rain does not stop kids (or knights or dragons) so they went all night long until they had hit every home here handing out candy. 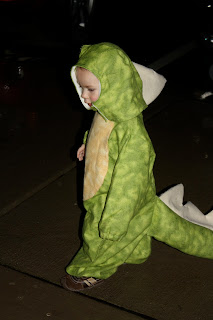 Finally we made it home....Henry's tail was completely soaked, I could literally wring water out of it. 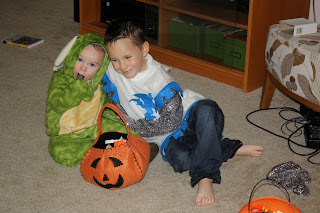 Posted by Sundee at 6:55 PM No comments:

Important things I have taught my child.

This is the conversation I had with Wesley while getting him ready for school. He was putting on the Dallas Cowboys socks that his great-grandmother had bought for him as she is a big fan.

Me:"Wesley, do you know whose team is the Dallas Cowboys?"
Wesley: "No."
Me:"It's Hampaw's favorite team." (Hampaw is Christopher's dad).
Wesley: "Oh. Our team is the Ravens. That is who we root for."
Me: "Yup, that is right. Who else do we root for?"
Wesley: "Um.....NOT the Steelers. They are on the bottom of the list."

I am so proud of him right now. From what little I know about football, at least I have thought him one lesson really well: never root for the Steelers. Ever. That is why they are on the bottom of the list.
Posted by Sundee at 10:09 AM 1 comment: