In the military you tend to move a lot. Well, we didn't move for 5 years but this year we are moving twice within 6 months so I guess that makes up for it. Anyway, when you move around a lot you end up with a lot of extra cardboard boxes. Of course many go to other people or recycled (at least we try) but I try to come up with some fun stuff to do with them too (thank you Pinterest for all the great ideas for our next move!). We had unpacked a couple more boxes this past weekend because my wonderful husband went into the Pit of Despair (otherwise know as our storage unit) and dug out my sewing machine. Which I have yet to use but that is neither here nor there, I have not had time yet. But I will. I swear.

Anyway, with two small boxes that needed to be used up I decided to quench Wesley's bordem and turn them into crafty kid projects. First we did glittery stars for their room. I didn't take step by step pictures of them (sorry) but they were super easy to do. First I drew stars on the cardboard (they were by no means perfect, but I liked the eclectic shapes we came up with. If you are a perfectionist then use a cookie cutter or stensil to outline them before you cut them out). Then I took a one hole punch and punched a hole in each one so we could hang them later. Then came the fun (and messy) part-glue and glitter. I used some of Martha Stewart's craft glue for glitter. I can't say that it was super special or anything (you could certainly use Elmer's glue or tacky glue) but it did a good job. We brushed the glue on all over the stars then poured on the glitter, making sure we covered the whole star. We let them dry, the did the back side. After they were all dry we shook off any stray glitter (although it will continue to fall off and get everywhere, just a warning. I mean, it is glitter.). then I took fishing line and threaded it through the stars, I knotted it so it would stay on. In the boys room we deicded to hang them infront of th window so I got three of those command hooks (clear plastic ones) and hung one on each side of the window and one in the middle (if you don't put the one in the middle up they will all slide towards the middle). Then we tied on the stars to the fishing line I hang up on the hooks. We staggered them, it turned out really cute. 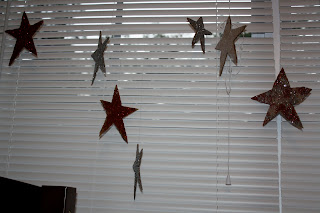 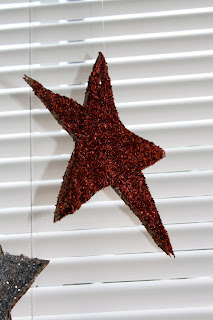 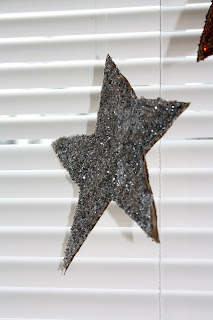 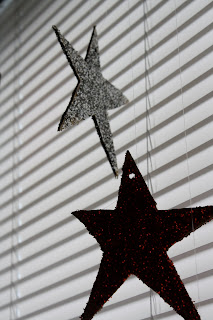 We used silver, red and white glitter because that is what we had on hand. I would NOT recommend the white glitter (maybe if you were using white cardboard) because it doesn't really cover. I wish we had gold glitter to use, that would have been pretty. I think it would be cool to do a rainbow of colors. We did do two stars where we mixed all the glitter together but it didn't turn out well. I don't recomment doing that either unless it's a premixed rainbow glitter. Even then I think the soild colors look the best.

Then we took one of the boxes we had cut the flaps off of to make the stars and made a castle out of it. Even if you have no "skills" you can still do this. Seriously. You will need a cardboard box (size small, you can buy one at Home Depot or Lowes if you haven't moved recently), a pair of sharp scissors or X-acto knife, grey, brown and black paint, two pieces of green felt and a hot glue gun.


Then, let your little knight (or princess) have fun! Wesley uses his Lego guys but you could make this for playmobile charachters or whatever you have.
Posted by Sundee at 9:49 AM

SHe is very crafty. I am impressed. Was it hard to pain the castle?? Tyler would go nuts for that.

Not hard at all. Wesley did most of the grey part then I did the black details. You could take a ruler and line it out first if you wanted the lines to be straight, but mine actually don't line up at the bottom in the back.